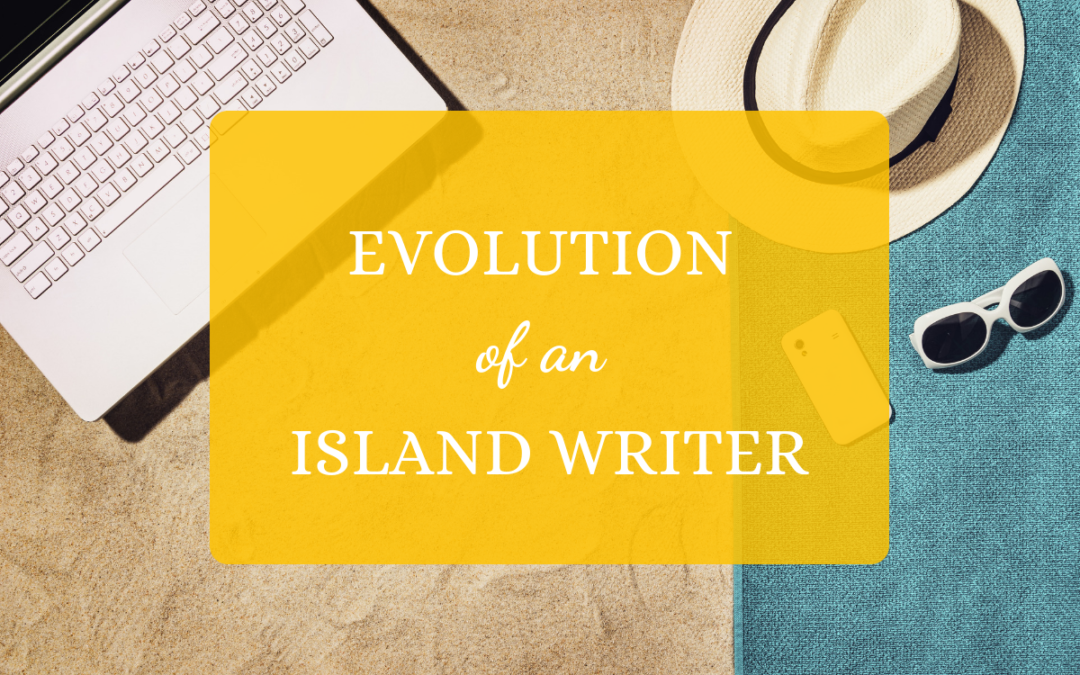 Evolution of an Island Writer

Looking in from the outside, it must seem as if those of us lucky enough to reside in the Caribbean region are blessed. The sky is blue, the sea is warm, and the sun shines almost every day of the year. Though gazing out from the inside, it can be a different story for local writers on a rock. Although we may love island life, the odds for commercial literary success are stacked against us. Many native Caribbean authors have migrated to the US, UK, and Canada because conventional publishers often find the writers’ location and worldview too obscure to compete in the global arena. When I attended the Key West Literary Seminar “Writers of the Caribbean” in January 2018, it was interesting to note that most of the featured presenters lived outside the region. For those seeking greater fame, it’s a logical career move, but I can’t help but wonder about immigrants like me who write from the region by choice. Not only are we restricted by economics and demographics, we also must navigate the tricky waters of cultural appropriation.

Cultural appropriation means stealing intellectual property, traditional knowledge, expressions, or artifacts from someone else’s culture without permission. To paraphrase an argumentative speech delivered by Lionel Shriver at the Brisbane Writer’s Festival in 2016, even fiction writers, especially those from privileged countries telling stories set outside the first world box, are supposed to be careful not to step on cultural toes. Identity theft can get you in big trouble with the local literary police — so much so that it might just be safer to stay inside your individual cubbyhole than to try to empathize with those from a different race, ethnic group, or gender identity.

“But that’s no way to write,” Ms. Shriver said. “It’s not good for the reader and it eats away at the writer’s soul.”

As an author working from a culture that is not my birthplace, I couldn’t agree more. Label me a cultural ventriloquist, but if a woman can write in a male voice and an adult can speak for a child, then why shouldn’t I be free to explore the Caribbean ethos from an alternative perspective? True, I am not an Amerindian, nor, to my knowledge, am I a descendant of European slave masters, or of African or East Indian heritage. I am a Caucasian American, an independent scholar of Caribbean culture per engagement, who is careful to pen my observations with empathy and cultural respect. I will admit though that this, unfortunately, hasn’t always been the case. At the beginning of my tropical adventure, “paradise” was a puzzle I couldn’t wait to solve by writing stories that compared my developed world mindset with carefree island living. While overseas cronies seemed enchanted by my stories, regional editors were less enthusiastic. Why? Because my early work was unconsciously driven by a condescending outlook similar to that of expatriate authors of yore. My privilege was showing, and I needed to pay additional dues and gain new perspectives if I wanted to be in the local club. After my dream house in the mountains burned down flat to the ground in 2000, and I lost all my material possessions, I admit I had second thoughts about staying on the island. Then I came across the catchphrase, “Carib-Being” which means, simply, a person who lives in the Caribbean. That would be me, damn it. If books were supposed to dispel the barriers between people from dissimilar backgrounds, then it was up to me to use my cross-cultural experiences, good and bad, to create mutual understanding. Three novels, a collection of short stories, a young adult novella, and dozens of pieces of published short fiction helped make me more comfortable in my own skin. Yet after twenty plus years of citizenship, reviewers still referred to me as “Dominican resident” Kristine Simelda. But my island odyssey wasn’t over yet. Everything I cherished, except my life, by the grace of God, vanished overnight thanks to Category 5 Hurricane Maria in September of 2017. Ah, well. I guess it could have been worse. But now what? Up until then, I had managed to duck the pressure from my children in the US to quit the “jungle” and move back to “civilization” but after Maria, the decision became crucial. To my mind, the question was this: Was I a writer or a refugee? Did I want to stay on the island in spite of the obvious disadvantages, or tuck my tail and slink back to the states, a place I no longer recognized? The answer was simple. A complete lack of electricity, phone/internet connections, passable roads, and a roof over my head were acceptable as long as I found a way to keep on writing about the place and the people I loved. Dominica, my physical and spiritual home, is my muse, and I don’t plan to abandon her anytime soon.

In January 2019, the People’s Choice Awards sponsored by the local newspaper voted me “Dominican Literary Artist of the Year.” It’s a lot to celebrate, as it looks like I’ve finally been granted membership into the club! But, truth be told, it doesn’t matter. The point, to me, is to tell the real story honestly and perceptively, and as long as I have the health and determination to live and write well, I plan to keep on doing just that. From the inside out. Are you a fellow writer on an island seeking to be published? Have you run into challenges as a writer on a rock?