Hot Flashing in the Tropics

This particular post is for the ladies… or those men looking for opportunities to man-splain something later and then get smacked for it! 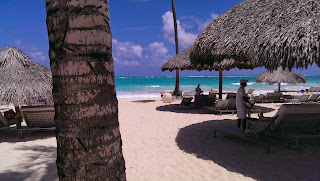 When we first visited the Dominican Republic and then purchased a house a year later, I was normal, hormonally speaking. I reveled in the lush tropical palm forests and green hills reaching out into the deep Atlantic blue ocean or into the Caribbean turquoise. My dreams of never shoveling snow again, walks down a golden sunset beach, wind blowing through my hair and flowing beach wrap were the images crowding out all rational thought.

Skip ahead a couple years and now, the realities of buying a fixer-upper in the Caribbean with only intermittent opportunities to just relax in our house have come home to roost! Knock, knock! Who could it be? Open the door and in strolls perimenopause! And with her, going hand in hand, come hot flashes, night sweats, and mood swings. Take it from me – they’re the worst uninvited guests a middle-aged woman could ever imagine.

Now, the sun-drenched island heat that was the main goal of this northern Michigan-bred girl is making her life miserable. Thank god we have a pool. That was a non-negotiable for my husband and myself. And without the ability to quickly cool down and/or wash away the rivulets of sweat running the entire length of my body, I would literally die. Originally, my main goal for early retirement was, “I want to miss snow.” That would mean that I live somewhere that doesn’t have snow, and missing it would mean I’ve lived there long enough to acclimatize and think fondly of a cold climate and its oodles of frozen water iterations. It never occurred to me that my own internal thermometer would throw a wrench in that plan!

I now have an appreciation for how cold my mother keeps her house in northern Michigan. She always said she was uncomfortably hot in our house in Metro Detroit. Can a person’s internal thermometer really be that different? Yes, I believe it can – and it can change radically too.

I suffer from cold-nose syndrome (a self-diagnosed syndrome, admittedly). When I get really tired, my nose gets noticeably cold; in fact, my whole body starts feeling chilled. I climb into bed, snuggle under the covers while placing a pillow over my head to retain heat and then a few hours into my sleep… BAM! I have to throw off the covers and let the cool bedroom air (if the city power-fed AC allows) flow over as much of me as possible! I’m sweat-drenched just hours after I felt gypped by the Caribbean night air chilling me. My expat-lady friends and I are always stashing those cheap Chinese fans around in cars, purses, and different cubbies. You never know when your forehead will spring a leak and start pouring sweat while you are trying to communicate with the locals who have these surprised yet pitying looks for you and your sweaty self. It is no joke. I’ve been buying them in bulk from Amazon and giving them out as party favors/gifts. There isn’t one middle-aged or retired woman I’ve met in the Dominican Republic yet who isn’t trilled to have one! I remember meeting someone for the first time at her home for a happy hour get-together and her very first words of greeting were, “Are you flashing, honey?” That same woman (who has become a dear friend) used to be the only smart one at dinner who brought a fan. We would end up passing that one single fan around to all the women in the group at one time or another during dinner. Thus began my crusade to arm all of us menopausal women in our little town of Cabrera with bamboo fans. When a small hand-wielded fan is not sufficient, I find myself with my upper body in the freezer section of the fridge or cranking up the A/C in the bedroom for that walk-in cooler effect.  Alas, as everyone knows, that just make the rest of the air feel even hotter upon return to your actual environment. 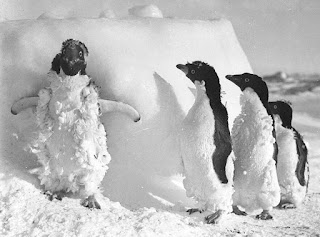 I have no data to support this, but I have come to the conclusion that our male counterparts seem unaffected by the heat. Anecdotally, I only feel commiserate camaraderie from my female friends.

I think my “missing snow” goal is not as far off as I could have imagined now that my hormones have taken the wheel and have steered me into Crazy Body Temperature Town. Luckily, I know right where to find snow.

All my family still live in Northern Michigan and I may be paying them a visit even sooner than planned. Signed, Sweaty Rene (a nickname I earned one summer as a waitress in Tampa, FL)