I have some fuzzy memories of many White Christmases from my childhood/teen/early adult life which consisted of rotating between bustling New York and England. These were places where the holiday season was made up of cozy roasting fireplaces, mulled wine, sweet pies, a crisp chill in the air, and – if we were lucky – enough snow falling to create a winter wonderland. Sure, there were also the overzealous crowds, shopping extravaganza, and general commercialization of what is supposed to be a sacred time, but overall, there was a special kind of magic in the air amidst the glorious smells of wintergreen and peppermint.

Now that I live on an island, the holidays have a much different feel to them and the traditions that mark the season have changed for me. These days, holiday decorations are put up with the A/C blasting, Christmas lights adorn palm trees not firs, egg nog is mixed with rum, sweet pies are pushed aside for cassava pies (a Bermudian dish of a sweet and spicy pie with meat filling), and my White Christmas has been replaced with a massive party on the pink sand beach – Santa hats, barbecues, and all. The holiday spirit can feel a bit unfamiliar here, even fleeting. But the adventures of soirees and the surrounding festivities are ones for the books.

One recent year, I was helping a friend pick out the perfect tree for his apartment as we were heading to a mutual friends’ beach Christmas party. We did a little one stop shopping for treats, mulled wine (difficult to find here), beer, rum, and fancy cheeses. Because in Bermuda so many of us have motorcycles and not cars, we had to get creative to be able to carry as much as we could. Getting the booze and food on board was easy enough; a couple bags in the lock box and a case plus a couple of bottles on the floor board weren’t too tricky mostly because I’ve become an unexpected expert master at this strategy. The Christmas tree transportation required a bit more strategic thinking… 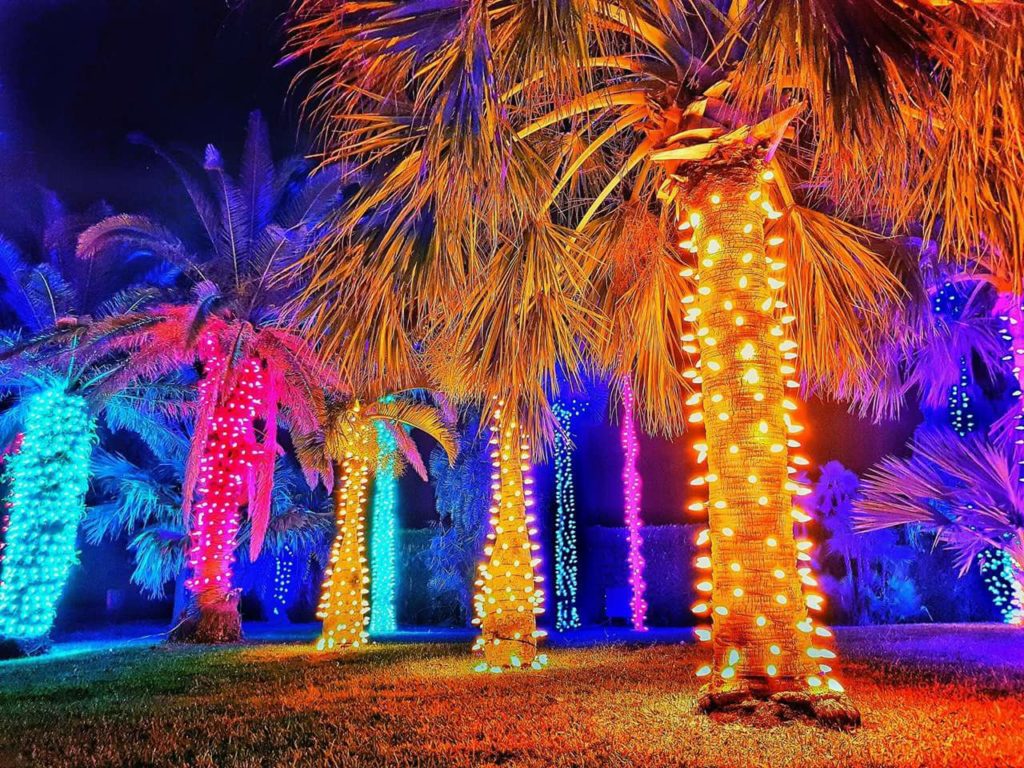 To think I used to have a fear of slipping on icy roads with Christmas stuff in my car! Now, that felt like nothing compared to the worry of a slight injury from a tree brushing against and poking fellow motorists along the way whilst keeping everything else intact on our tiny, winding roads. My friend had picked out a cute tree at a local farm, about as big and bulky as a standard office chair and as tall as an Irish Wolfhound. It was nothing new in Bermuda to see motorists hauling Christmas trees on their scooters, but when you’re the one who’s actually doing it, it feels like a much more daunting task.

After assembling all the goods on my bike complete with bungee cords, we then moved to his – a bag of groceries on the floorboard, with a pie on top. Our main goal was getting everything in one place without having to stop traffic to chase a rolling Christmas tree down a hill in 72 degree weather and flip flops. First, we attempted to place the tree behind him, wrapped and tied so that he could lean back to hold it in place. That didn’t work. There seemed to be too much probability of it sliding off while underway. We tried several other impractical variations, working up a sweat with each heave-ho of the tree.

We finally assembled it between his legs at an angle and found ourselves actually driving the speed limit with acrobatic balance we didn’t know we had. We arrived at the beach and almost everything made it. The pie unfortunately got squashed in the dismount, but hey – a small sacrifice for all the rest, right? We ended up setting up the tree in the sand and decorated it with island jewelry and Christmas light necklaces. Then came rum swizzles, pineapples, appetizers, and dancing under the moonlight to traditional holiday music in a very untraditional setting.

Every Christmas in Bermuda, the man in a velvet suit arrives by boat and has a photo op on our pink sand beaches. The children love it and the innocent, joyful glow on their little faces is contagious. Surely, this must be better than snow! It has also become tradition that everyone goes to our well known Elbow beach to have one big island Christmas party on Christmas Day. It begins in the morning on island time and there is never adequate parking, so everyone’s bikes and cars are lined up everywhere and anywhere there’s room, and all walk several kilometers with coolers, drinks, barbecues, their dogs, and much more in swimsuits and santa hats. It’s a bit cold to swim, but of course we do it anyway, and the smell of the ocean over chestnuts on an open fire is refreshing, if not an adjustment.

It may not be “the most wonderful time of the year” for everyone, but what’s life or holiday on the rocks without a close knit community coming together to eat, drink, frolic in the sand, and be merry in our own island-style way?

That kind of island spirit is the kind that endures beyond the holiday season and what makes Bermuda such a special place all year long.